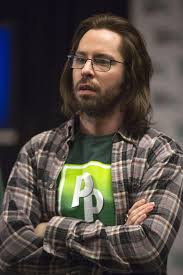 It has been remiss of me that I haven’t blogged about Gilfoyle. This will just be a short note but an important one nonetheless.

It’s no secret that I am an avid Silicon Valley fan. I took an instant liking to Richard, my feelings there are undeniable however misplaced they may be. My affections are strong and ever growing for Erlich and more so Erlich and Richard as a duo. A true partnership indeed.

Gilfoyle is what I would describe as …an acquired taste.

Our resident LaVeyan Satanist holds the role of System Architecture/Networking and Security at Pied Piper. It is probably best surmised here by Gilfoyle himself and provides a nice introduction to his personality.

Sure he’s self proclaimed and oozes sarcasm almost always delivers most sentences in a deadpan manner – but I felt that there was turning point in episode 7 of this season. Perhaps it was the encroaching darkness surrounding Pied Piper, the string of bad luck that now saw them at odds with EndFrame – everything seemed dire for the team. Only in this type of an environment could the dark prince of the gang rise and thrive. And rise he did.

Morals for Gilfoyle would at best be classed as “loose”.This approach meant Gilfoyle had no ethical dilemma taking the CEO of EndFrame’s password during a meeting that was a complete disaster. He was able to acquire the necessary information that would potentially save their backsides, regardless of the manner in which he was able to do so being questionable. (but hey if you are stupid enough to leave company intel on display…)

Up until this point I thought he was rather self serving and I believe that status still remains ,however he was definitely on team Richard and team Pied Piper. Yay

I viewed his actions as risky but someone in a start up business has to take risks and it certainly isn’t going to be Richard or Jared. He stepped up and it only cements his value to the group.

He may wear a black hat but someone has to. Go forth and continue your greatness Gilfoyle.

As a side note  – I totally would get on with everyone in that hacker hostel… I could listen to my heavy metal music with Gifloyle. Richard and I could encourage each other’s neurosis and all things anxiety and IBS. Dinesh and I could discuss our general lack of awareness in regards to the opposite sex. Jared and I could plan until the cows come home, making processes and SWOT-ing  all day and as for Erlich..well… how could any lady resist such a striking man.